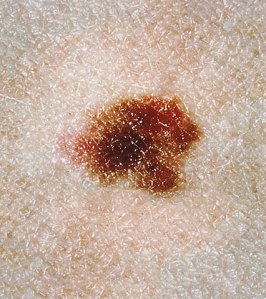 On March 22nd I went to the dermatologist for a routine preventive check-up. My interest in getting a heck of my skin started with a kick in the seat of my pants from my late wife. She had been diagnosed with Melanoma Cancer in June 2015. She scheduled an appointment for me with her dermatologist to get a complete check-up. During the examination, the physician did a biopsy on a spot he found on my back.

The biopsy results from March 22, 2019, are in. The biopsy is benign and called Dysplastic Nevus. The MD told me we will keep an eye on it every six months. He said Dysplastic Nevus resembles Melanoma and often only by biopsy can you tell they are not Melanoma.

He removed an area about the size of a quarter. The spot had not been there in the previous check. It was located at the center of my back in an area that even with a mirror I could not see clearly.

The dermatologist said I probably saved my life by starting having the preventive checks when my late wife, Miss Benita, developed Melanoma in 2015 and sent me in for a check-up and regular follow-ups.

He said unchecked this probably would have grown into Melanoma. He said he actually thought it was Melanoma before the biopsy results.

A Special Thank You to My Late Wife

Thank you to my late wife, Miss Benita, for sending me to get checked and getting me on a regular schedule of preventive skin care. Thank you, Jesus, for the noncancerous results.

Photo Source: Public Domain. This image is a work of the National Institutes of Health, part of the United States Department of Health and Human Services. As a work of the U.S. federal government, the image is in the public domain.

Jimmie Aaron Kepler is an award-winning writer and poet. Born in San Antonio, Texas, to a career military father and stay at home mother, he lived in six states and attended eight schools before graduating high school. He earned a Bachelor of Arts in History with minors in English and Military Science from The University of Texas at Arlington, Master of Arts and Master of Religious Education degrees from Southwestern Baptist Theological Seminary, as well as the Doctor of Education degree. His writing awards include the CIPA EVVY 2021 Bronze Winner in the Spiritual/Religion Category and the 2021 NYC Big Book Award Distinguished Favorite for Christian Non-Fiction for Kissing Guilt Goodbye: Breaking Free from the Shackles of Shame (enLIVEn Devotional Series Book 3) for which he was a contributor and the East Texas Christian Writer’s Confernce best short story award. Before writing full time, he worked as a US Army officer for 8-years, religious educator for 18-years, and as an IT software application engineer for over 20-years. He is a widower. He lives in North Texas with his cat Lacey. View all posts by Jimmie Aaron Kepler, Ed.D. View all posts by Jimmie Aaron Kepler, Ed.D.

This site uses Akismet to reduce spam. Learn how your comment data is processed.