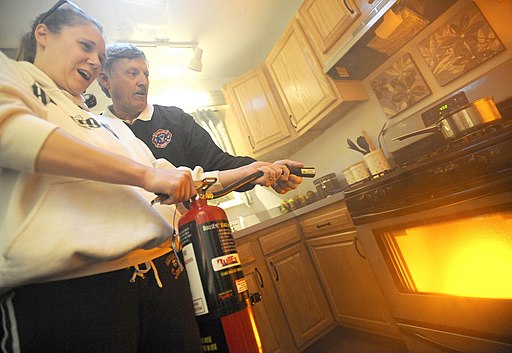 The picture is not my oven.

However … I had a terrifying flash grease fire in my oven this past Sunday. I had been broiling burgers and had a “boom” and flames shooting out from around the oven door about a foot on all sides before dying. The fire was hot enough to burn the paint off the counter door hinges next to the stove.

I was smart enough to not panic and not open the oven door allowing the fire to burn itself out quickly. Grease from the broiling burgers went boom, and even though they were in a pan and the pan was covered with foil, the grease fire happened. What a mess. Apparently, I did something wrong.

I did not call the fire department because it burned itself out. The house was really smoky, and I turned on the vents an opened the doors and windows. Then the home heated up went from 72 degrees to 82 degrees in less than 30 minutes. It was 99 degrees outside.

The fire reminded me of how a BBQ will have fire flair up when grease hits the charcoal or flame. FYI I do have fire extinguishers in the kitchen.

Thank you, God and guardian angels for looking out for me. This is just another of the joys of being a widower and how God looks out for me.

As I told my 42 years old son when I called him informing him of my adventure that “I was just trying to cook as per the instructions on the frozen hamburger patties.” One option was to broil them.

I was going to cook the entire container and then just reheat them. This is just another adventure. The torture is cleaning the oven. I have started. I have thought about just buying a replacement, but I need to clean up my mess.

Thank you, God, for your watch care. And ladies, if your husband gets near the stove or oven, you may want to tell them to please step away before they hurt themselves or burn down the house.

What to Do When It Catches Fire

How to Avoid An Oven Fire

Jimmie Aaron Kepler is an award-winning writer and poet. Born in San Antonio, Texas, to a career military father and stay at home mother, he lived in six states and attended eight schools before graduating high school. He earned a Bachelor of Arts in History with minors in English and Military Science from The University of Texas at Arlington, Master of Arts and Master of Religious Education degrees from Southwestern Baptist Theological Seminary, as well as the Doctor of Education degree. His writing awards includes finalist in the 15th National Indie Excellence Awards for Self-Help Spiritual, CIPA EVVY 2021 Bronze Winner in the Spiritual/Religion Category and the 2021 NYC Big Book Award Distinguished Favorite for Christian Non-Fiction for Kissing Guilt Goodbye: Breaking Free from the Shackles of Shame (enLIVEn Devotional Series Book 3) for which he was a contributor and the East Texas Christian Writer’s Conference best short story award. Before writing full time, he worked as a US Army officer for 8-years, religious educator for 18-years, and as an IT software application engineer for over 20-years. He is a widower. He lives in North Texas with his cat Lacey. View all posts by Jimmie Aaron Kepler, Ed.D. View all posts by Jimmie Aaron Kepler, Ed.D.

This site uses Akismet to reduce spam. Learn how your comment data is processed.